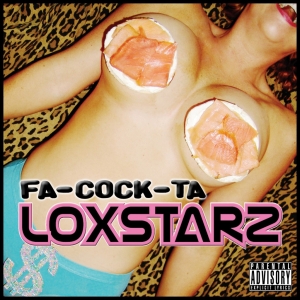 Links for You & Your Bubby:

Pictures for you to print out for your Jewish Mom:

Straight outta Vegas (well one from Detroit via NYC, one from NYC via PA, and from Queens) — three jews with nothing to prove, who haven’t been to temple in years, and mix milk with meat on a regular basis got together one night and decided to make a joke out of the holy jewish traditions that more religious types hold so dear.

Sure to enrage orthodox rabbis everywhere, MC ETHEL, Jewish Dave, and AVI D.O.G. (Da Orthodox Gangsta) are comin’ atcha with beats, rhymes, and a whole lotta pork.
WHAT THE HELL IS FA-COCK-TA?
FA-COCK-TA is raunchy, hilarious, fantastical comedy hip-hop blending masterful lyrics about sex, whitefish salad, and Sarah Palin with a culturally Jewish, yet never religious twist. They are the kids your Jewish mother warned you about.

Intentionally raunchy, devilishly clever, and a complete affront to anything conservative, FA-COCK-TA are busting out of Vegas with heeb-flavored rhymes that are totally contagious. They’re a triple-Jew crew with attitude!

What’s more impressive? The lyrical genius of Jewish Dave? The soaring vocal abilities of MC Ethel? Or that Avi D.O.G. can drop beats so masterfully while still managing to make a talis this year’s fashion statement? Experience FA-COCK-TA live and decide for yourself!

Their debut show at MIST inside TREASURE ISLAND-Las Vegas, happened on Rosh Hashanah 2005 and featured a Manichewitz Martini menu and an Apples and Honey Bar! Their second show at the Las Vegas Bagel Ball found them yaking it up with Jewish singles twice their age — which means there’s hope for them yet! J Date anyone? Check out their website at www.FA-COCK-TA.com and definitely pick up their debut full length album, LOXSTARS, released in December 2008!
A conversation with FA-COCK-TA:

“Think of us as Run D.M.C meets South Park at a Bar Mitzvah”, says MC Ethel, the woman of many voices who comprises one half of FA-COCK-TA’s writing and producing team. “We’re dirty, we’re funny, but most importantly, we’re highly sacreligious. If a Jew is coming to our show to have some kind of religious experience, it certainly won’t be a Jewish one. Now if it’s a cute guy…I can definitely give him an experience he won’t forget.”

“We pretty much fall into the ‘sick and wrong’ genre, but from what we hear, that’s pretty popular these days” says Jewish Dave, FA-COCK-TA’s other half. “Ethel and I get our material from all the best places – delis, grandparents, and most of all, our own personal sexual experiences. We’ve gotta be the sluttiest Jewish rappers on earth.”

“Speak for yourself!” barks Ethel from across the room, enjoying her morning bagel with coffee.

Asked if he always folds in the face of Ethel’s demands he agrees that this is standard. “She can be kinda bossy sometimes, but hey, if the music is good, all her bitching and kvetching is worth it.”

You can catch FA-COCK-TA dropping rhymes about sex, drugs, and pork December 23rd at their “Hipster Hannukkah Ho-Down” album release party inside The Beatles Revolution Lounge at the Mirage Casino Resort. Their debut album LOXSTARS, is now available on cdbaby and iTunes.
FA-COCK-TA loves you a lot! Shalom Motherfuckers!
xo — Avi, Ethel, and Jewish Dave